I had been looking forward to getting back to the West for some plane spotting. I was even more looking forward to the opportunity to fly again on the Airbus A330 - something I haven't done for some time. This flight was with Qantas, departing Brisbane (on the East Coast) for Perth in the early afternoon. The scheduled arrival time into Perth was due to be jsut after 6.30pm.

I arrived at the Qantas Domestic Terminal at Brisbane Airport fairly early, and the first thing I noticed that the now fully-operational automated check-in facilities. 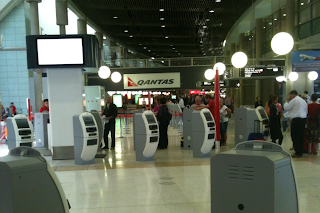 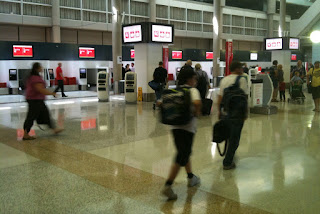 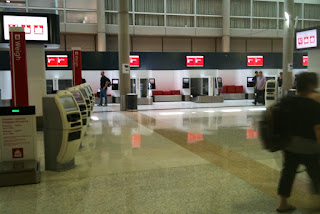 I used the checkin kiosk as per normal, but now for passengers to check-in bags, they can basically serve themselves - with some assistance from the large number of Qantas staff who were there to help! The bags are weighed automatically, and tag(s) for destinations, connecting flights, heavy bags, etc are printed at these kiosks. The bags then disappear into the departure area!

I was able to carry my bag on board, so went through security screening and upstairs in the Qantas terminal for some plane spotting!

Upstairs, I enquired about about an exit row seat but none were available so with window seat 41K assigned to me I thought that was good enough!

The inbound flight from Perth seemed to be running pretty much on time which was a nice surpirese as today was the day for the Qantas baggage handlers and ground crew industrial action. These qantas workers stopped work for four hours around Australia during the morning peak. By about lunchtime though, I think most flights were running only about 10-30 minutes late despite the number of cancelled and delayed flights during the morning. 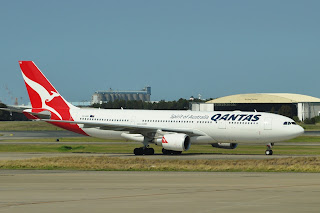 I noted that Airbus A330-200 VH-EBO was operating our flight this afternoon as it was operating the inbound flight from Perth. It eventually touched down in Brisbane about 10 minutes late, so we were given a new boarding time of 2.40pm which was actually the original departure time. 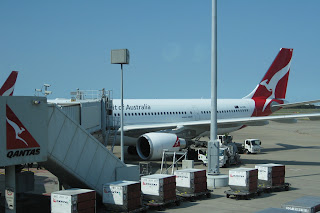 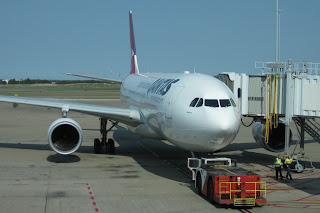 As I approached the gate I again enquired about an exit row seat, and to my surprise was given a window in exit row 44. 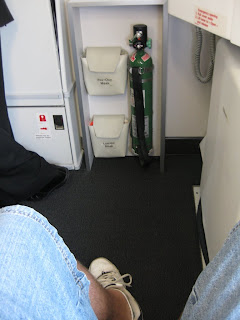 As the picture from this seat shows, even though there is a crew seat, and a door at this seat, leg room is still more than ample... And we are close to the toilets too! 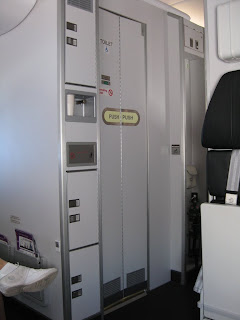 The A330 is a nice big plane with a 2x4x2 layout in the economy section. The legroom at the exit (door) seating is quite ample, although I'm jot too sure about how much room there is in the other seats. 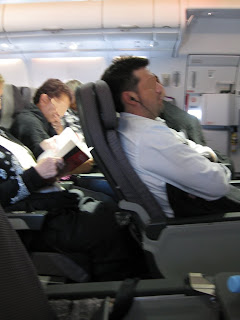 Back inside the terminal, boarding finally commenced about 2.55pm.

Everyone seemed to find their seats quickly and we ended up pushing back about 30 minutes late. 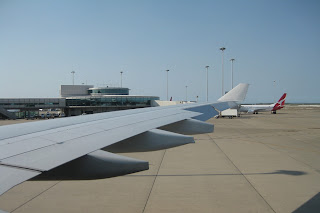 Quick taxi to the Alpha 7 holding point and take off from Brisbane's Runway 01. With a series of right turns back over the airport and over the Southern suburbs of Brisbane, we were evenutally established towards Broken Hill, outback South Australia, the Nullabor Plain, and eventually to Perth. Flight time was planned to be just over 5 hours. 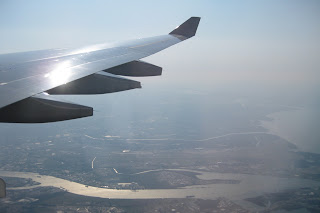 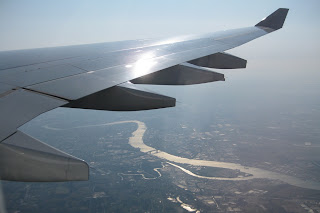 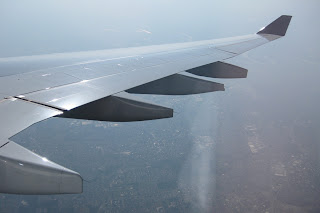 Lunch was served pretty quickly which was good as the views out the window were blocked by smoke haze. 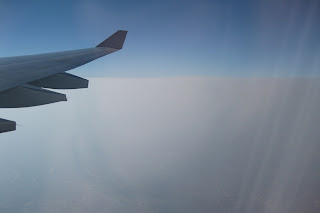 Lunch was a choice of a hot chicken or pasta dish. I went with the chicken, which I had with a white wine. Overall it was a pretty nice meal! 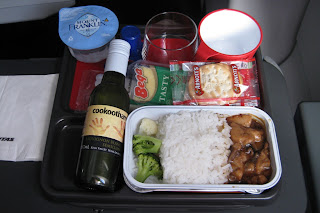 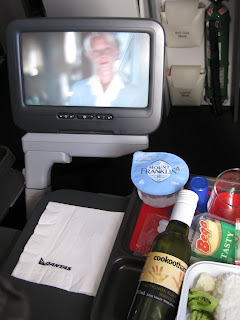 Rubbish was tidied away pretty quickly afterwards and so I sat back to watch a movie on the personal touch screen television, which is a very nice and modern feature of this still fairly new A330. As shown below all passengers have their own personal touch screen television to view a pretty good selection of movies, tv shows, and other sorts of entertainment, including games and full length music albums.

The views improved out the window and eventually central Australia turned on some magical views. I believe we could even see Lake Eyre. 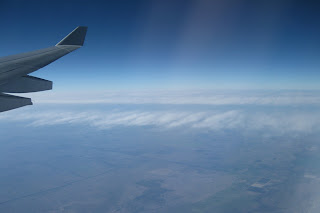 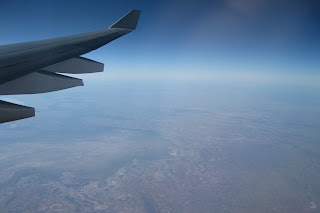 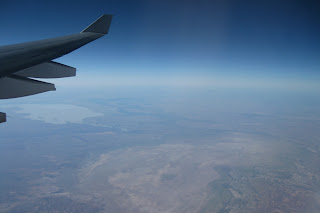 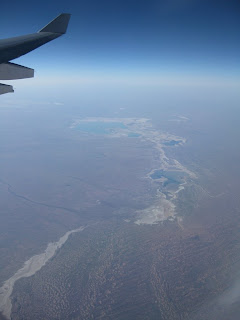 About half way through the flight - and just as my movie I was watching was getting interesting - the AVOD system froze in our section of the cabin. No amount of coaxing - including a full system resest - could get our TVs going. The Customer Service Manager (CSM) was good about the situation though, and came to our section of the cabin, allowing passengers who wanted to watch TV the opportunity to move forward in the plane to a seat where the TV was working. I believe there were about 20 or so spare seats up ahead of us (there were some spares in our part too, so this was not a full flight). All these seats were taken. I decided to stay in my seat and write a few notes for this trip report! The business man beside me cleaned out some of his 800+ emails in his Outlook inbox! 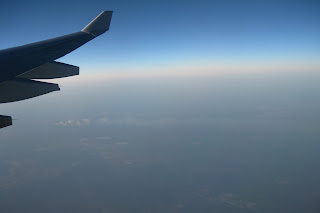 So finally as the sun was setting we commenced descent in Perth. In all we were now probably running about 5 minutes late.

The Captain advised that Perth approach was busy and so we do some holding before we make our approach. So around we went - one large orbit only - with some more specatular views - this time of the late afternoon sunlight - and then we headed into Perth. 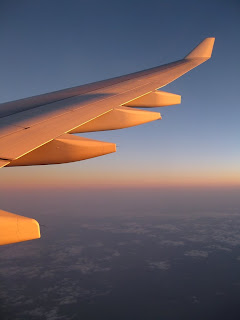 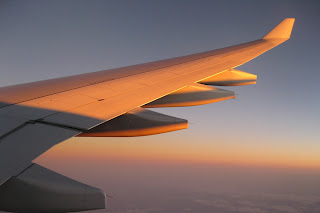 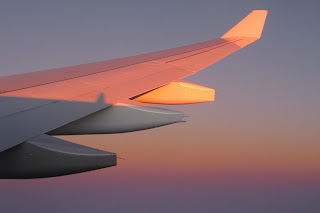 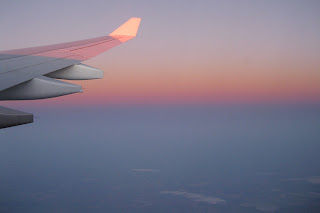 A series of right then left turns had us on finals for Runway 24. We touched down about 15 minutes late. 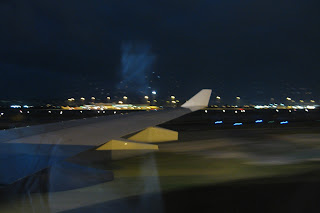 A slow and careful taxi past the empty Terminal 3 - the Virgin Australia, Skywest, and Tiger terminal - before we parked at out gate at the Qantas Terminal - Terminal 2 as it is known. We were only about 20 minutes behind schedule, which is not bad timing I thought considering all the industrial action earlier on in the day. Qantas had done quite well in my opinion. 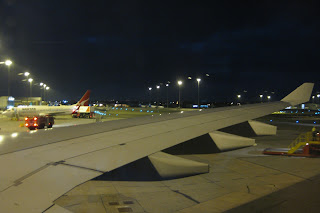 Off the plane eventually - there was a medical priority passenger to deplane first - and through the terminal and downstairs to baggage collection and the hire car desks. 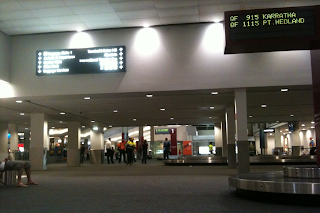 Overall this flight was quite enjoyable, although the AVOD system locking up in our secion of the cabin was a problem. As I said though, I decided to stay in my seat but could have moved to a seat where the AVOD was working. This was a nice touch by the CSM who seemed a little embarassed by the break-down.

The meal and the overall service was excellent, and as always, all Qantas staff I encountered were very friendly and helpful.

I spent two days in Perth and had a great time plane spotting. My return trip to the East coast was with Virgin Australia - riding in one of their new Airbus A330-200s on the "capital jet service" back to Sydney - you can read that trip report HERE.
Posted by Damian F at 1:00 PM