At the end of our long journey overseas, we returned to Brisbane early in the morning, and courtesy of a lift (thanks again Mum and Aunty!!), we arrived at the Brisbane Domestic Terminal about 2½ hours before our flight. Jetstar have a fully automatic check-in system in Brisbane, meaning we had to simply type in our reservation number into the kiosk, specify how many bags we had to check-in, collect our boarding passes and bag tags, apply the bag tags (per attached instructions!!), and proceed to the bag drop and away we go!! Simple!!

And yes – it was very simple and easy!! We walked straight up to a check-in/bag drop agent (no queue necessary) and gave the bags straight over, and since exit row seats were available, we took them, and we were issued with our new boarding passes.

It does seem that all Jetstar passengers are encouraged to use the automatic check-in now as some people who said they couldn’t use the machines were being re-directed back to them to try again – perhaps the check-in agents will be done away with soon??

Up through a fairly big security queue – which we were now used to thanks to travelling though European airports – and straight to Gate 38 where VH-VQF (in new colours and pictured below) pulled up to take us north. 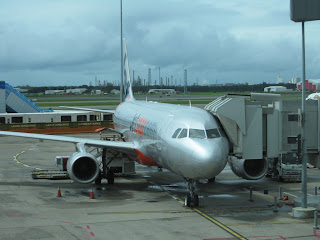 Boarding was though the front door only and by row number, although I don’t think the public like to play by these rules as there were people in just about every row when we eventually decided to board. Flight ended up being about 75% full. Push back and start – complete with "barking dog" – was pretty much on time, followed by taxi and fairly quick take off from Brisbane’s Runway 19. Through the clouds and a fairly smooth flight up North with the luxury of the extra legroom of the exit room – as shown below. 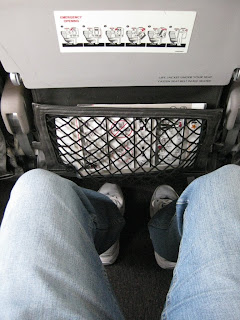 Snack service came through very quickly with no one really buying anything, so with that done, the cabin crew (only three) weren’t seen until preparations for landing. A very cloudy Mackay awaited us and the seat belt sign came on shortly after we started descent. We flew the VOR approach from overhead the airport with a left turn onto finals and landing Runway 14 at Mackay. Bags came out after about 10 minutes.

Jetstar service is great – I like the idea of the (nearly) fully automated check-in procedure – and as usual the on-board service was great.
Posted by Damian F at 6:19 PM No comments:

Well this (comparably) small trip started my wife and I’s journey to Europe. A 6.45am departure meant an early start and we arrived at the airport at about 5.30am. Check-in wasn’t open, and neither was the airport's café… hmmm… we waited about 15 minutes and check-in opened with 2 agents checking our QantasLink flight in. Small queue and soon to the agent where our big (28kg) bag was checked in to Brisbane without dramas. We also checked in a smaller bag too. We were assigned seats in the back row of our plane, which again isn’t an issue as legroom is ample in the Dash-8-Q400.

By now the airport's café had opened so we settled back for some breakfast, then through security, and then waiting for our flight! The morning's Virgin Blue Embraer E190 service to Brisbane boarded, and whilst it was starting and taxiing away, we commenced our boarding. All this was done in about 15 minutes – flight was full. Engines start, taxi onto the runway and back-track to take-off Runway 14 at Mackay.

Some nice early morning views over the Hay Point and Dalrymple Bay Coal terminals (just South of Mackay Airport) with as many as 70 ships anchored out to sea waiting for their turn to load. 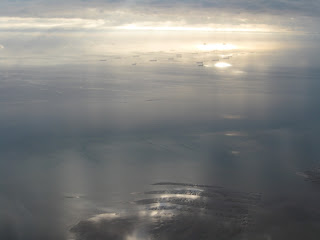 Breakfast was served and consisted of yogurt and muesli bar, along with orange juice and tea/coffee. 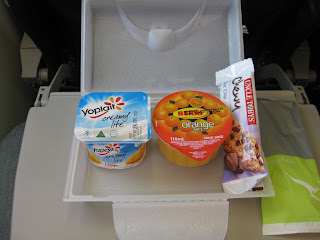 Smooth flight and descent with a nice view of Caboolture Aerodrome out to the left side. 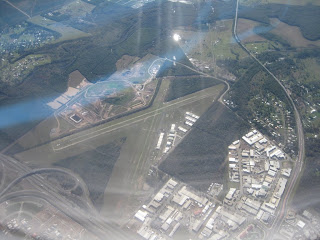 We overflew Redcliffe and made a visual approach to Runway 19 into a fine and sunny Brisbane. Got to the stand-off gate, seat-belts off, passengers standing-up and keen to get off, bags were coming off… but we waited… and waited… and waited… Turns out another Dash-8 was taxiing out before we could get off the plane. We obviously then collected our bags pretty quickly and waited for our lift up to the International terminal (thanks Mum and Aunty!!).

Overall another great flight with QantasLink!
Posted by Damian F at 6:18 PM No comments: