With the recent news that Strategic Airlines is withdrawing from the Gladstone to Brisbane route, a friend of mine, Shane T, who lives in Gladstone, has kindly provided the following trip report from a flight he took a couple of months ago.

Strategic Airlines seem to offer a good product, for what seemed to be a good price. It is unfortunate that they have decided to pull out of the Central Queensland market. Time will tell if they are to return to Central Queensland in the future, either operating in the RPT market again, or operating fly-in fly-out charters. It will also be interesting to see how Virgin Australia goes on the Gladstone to Brisbane route now too!

After the recent breakdown of their Airbus A330-200, Strategic Airlines had cancelled as many as four recent services between Brisbane and Gladstone without much notice to intended passengers. In some circles, Strategic Airlines had handled this whole episode very poorly which is disappointing as there is an increasing wave of support of their operations into Gladstone.

So up came Friday's afternoon service from Brisbane to Gladstone - fortunately it wasn't cancelled.

Check in was easy in the central part of the Brisbane Domestic Terminal - the "Common User Area" - before through security and out to the end of the newly redeveloped centre finger area.

Boarding and departure on time, and before too long, VH-YQB was airborne for the quick 44 minute hop up to Gladstone - this compares to a six hour drive made earlier in the day!! 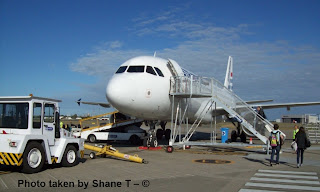 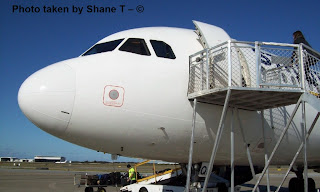 This Strategic Airlines A320 - VH-YQB - has 152 seats in two classes, and has standard cloth seating in economy, with 144 seats in a 3x3 seating arrangement. Although the Strategic livery is uncreative, the cabin was impressive and well presented. 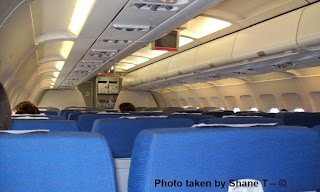 This compares to sistership VH-YQA, which flew to Gladstone earlier in the year on a promotional visit, and features a very nice and well presented two-tone leather seat design. 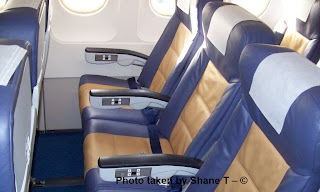 Outside was a perfect day for flying as shown in the following pictures of us climbing out of Brisbane over Moreton Bay. 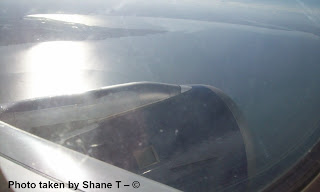 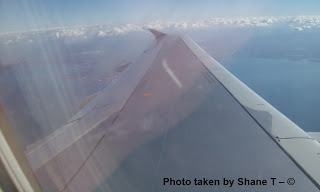 Cabin service was average, although with a flight time of only 44 minutes, the crew are hard pressed to spend too much time comforting people. They served a snack which included a chicken roll - very nice - a Kit-Kat chocolate, and drinks, which included a choice of water, orange juice, soft drink or beer.

Soon Gladstone Airport came into view, and with a series of turns from North of Gladstone, we were on approach to Gladstone over the nearby mud flats and Gladstone Harbour shortly before touching-down on Runway 10. 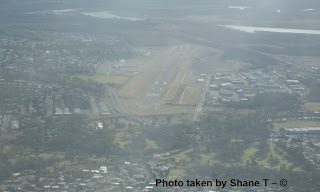 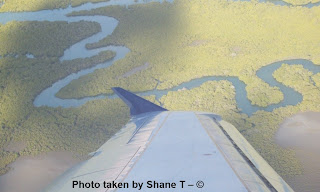 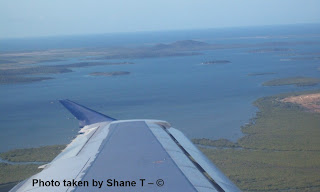 Disembarked and into the refurbsihed terminal. No bags - straight out to see VH-YQB at its parking position against the fence. 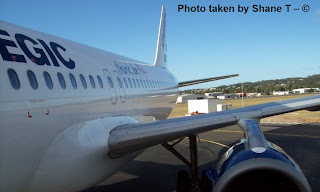 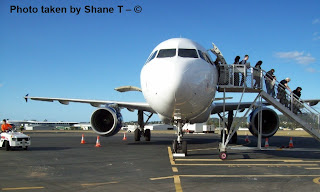 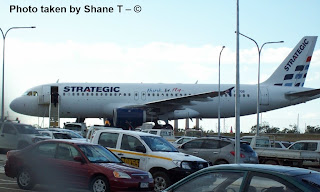