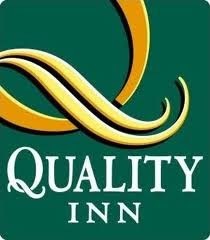 I thought I'd give a different motel a go on a recent by trip to Rockhampton and with the Quality Inn Centrepoint Motel, I wasn't disappointed.

The motel is promoted as undergoing a major redevelopment and is under new management. There are large conference rooms, and a nice looking pool area on site as well. Also, being a member of the Quality Inn chain of motels meant I received frequent flyer points for my stay. 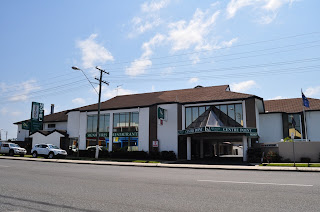 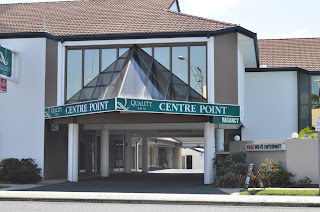 From the outside the place looks quite nice. Inside, a renovated and modern reception desk greets guests. There are also stairs to Signatures Restaurant, which is on the second floor. Unfortunately, my brief stay meant I didn't get to eat at the restaurant, although it did look busy in the evening, and judging by the menu that I found in my room, Signatures Restaurant does look to have a good choice of food. I ate dinner and breakfast at one of the nearby fast food outlets of which both all the majors plus a nice Coffee Club are all within 1-2 blocks of the motel.

One downside to the motel I found almost immediately was the lack of undercover parking. I arrived in the early evening and found all but one space was taken. Given a large storm was inbound to Rockhampton at that time, I was glad to find the cover! There is additional open-air parking at the rear of the complex.

The room looked quite nice as I walked in. I stayed in a Queen room and as shown there was plenty of space and it was well appointed. There other levels of rooms available including Twin Bed Rooms, King Rooms, and Spa Suites. 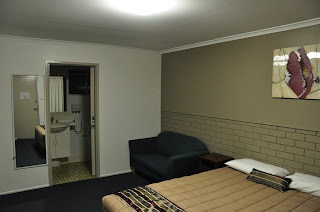 There was a large bed, air con, desk and chair, lounge chair, and a large flat screen television that had a full range of digital and complimentary some pay-television channels. There is also a user-pays in-house movie service too. A free WI-FI Internet connection and an Internet Café are also available at the Motel. 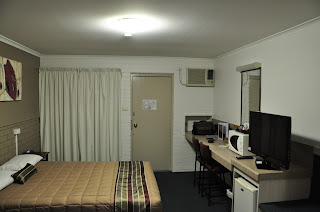 The bathroom gives the motel's age away with an older appearance including old-tiled floors and painted brick walls. It is still quite nice and has a decent size – fairly roomy with a shower, hand-basin and toilet. 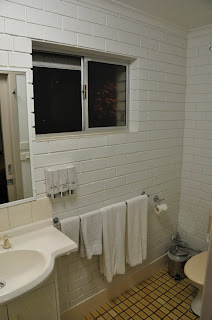 A nice night’s stay was had at the Quality Inn Centrepoint Motel, and while I didn't sample the restaurant, the motel is an ideal place for the business or holiday traveller to spend the night or longer. Although, if you want your car undercover during storm season, make sure you get the motel before the sun goes down!!
Posted by Damian F at 2:04 PM