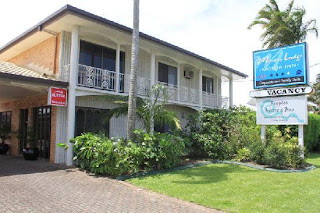 The Miners Lodge is an independently run motel located towards the Northern end of Nebo Road - the main location for Mackay’s motels. This motel is located on the corner of Lloyd Street and offers two drive way entrances from this street and Nebo Road. The Miners Lodge Motel is situated in close proximity to the Mackay city heart, Canelands Shopping Centre, Mackay Airport, and industrial hubs.

In fact, the motel is located right underneath the Mackay Airport flightpath, and aircraft on late finals on Runway 14 pass over the motel at low altitude making it a great motel for an aircraft enthusiast. Obviously, aircraft noise can be an issue, although most jet traffic at the airport is usually over by 9pm. The Motel also features an attractive pool area and barbeque facilities. 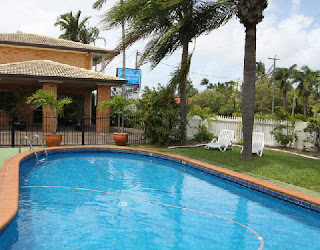 During my previous stay I shared with a colleague in a two bedroom suite. The suite was quite large and featured two rooms with a queen-sized bed in each, as well as a television. The televisions have the full range of commercial channels as well as a selection of free cable television channels. This room also featured a large bathroom and a kitchenette in the room that I slept in. There was also a connecting door to the next room, allowing these two rooms to be used by a family.

During my recent stay I was in a single bedroom suite towards the front of the motel that had one queen-sized bed. Again, the room was well appointed with television (again with free cable TV channels), air conditioning, table and chairs, fridge, and tea and coffee making facilities. The Motel also has free WI-FI throughout the complex, as well as full undercover parking spaces. 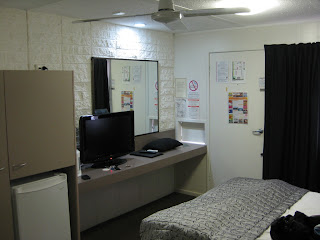 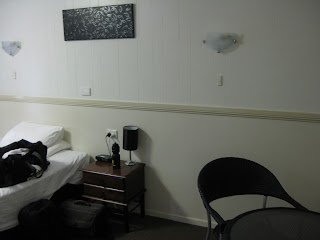 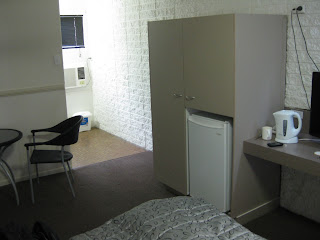 The room had the bathroom basin on the outside of the bathroom tucked in the back of the main room. The bathroom was small and was basically a toilet and shower. 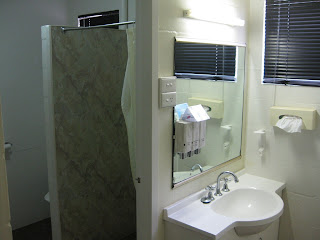 The bathroom gave away signs of the motel’s age. While the sleeping area looked reasonably nice and modern, the bathroom featured tired looking decor.

There is a nice restaurant on site – Ripples Bistro and Bar – and during both stays, the quality of the food and of the service was outstanding. 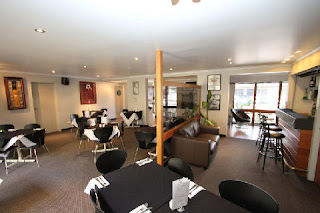 Moreover, the friendliness and helpfulness of all of the staff at The Miners Lodge Motel have made it a place that I can highly recommend to stay whenever you are in Mackay.
Posted by Damian F at 2:29 PM