This was a much anticipated flight, with Virgin Australia recently starting cross-Australia flights between Melbourne/Sydney and Perth with their newly acquired Airbus A330-200s. 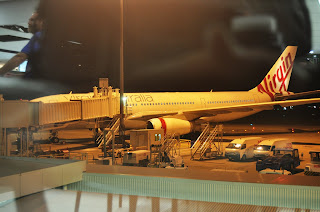 I checked in really early - about 6 hours before departure. As the check-in area was quiet I found out that all seats On Virgin Australia flights are upgradable so long you pay the difference and a Velocity Frequent Flyer points upgrade is available, only if applied for two days prior to departure. Something to note for next time! 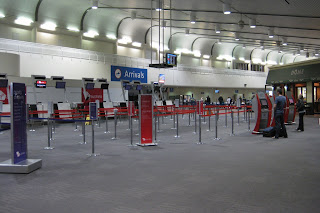 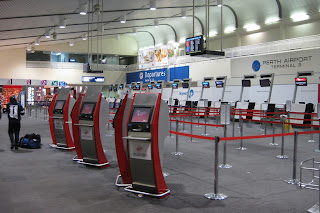 Having booked the ‘special requirement’ of blue zone seating with the extra legroom – at a cost of $45 on top of the ticket – I was unable to use the check-in kiosk so had to approach the lovely lady at the desk to check me in. She was able to this - I was assigned the window at 26K – near door 2.

Funnily enough this turned out to be the same seat that I had in the Qantas A330-200 - VH-EBO - that I had flown to Perth in the day before – you can read the trip report HERE! 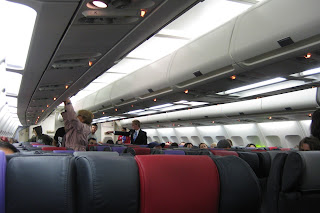 The seats also feature TVs and personal entertainment systems with music, Foxtel pay-television channels, movies, and games, all through the use of a handset mounted and available in the seat. 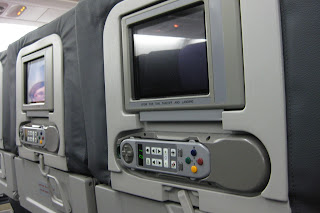 Legroom as expected is ample in this exit row seat, with a crew rest seat opposite this row as well. 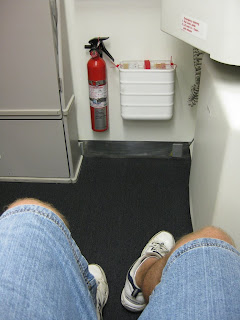 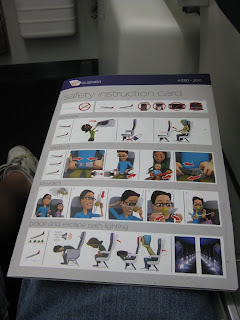 One small problem we encountered was that the TV mounted on the wall opposite our seats wasn’t working properly. The problem was that Virgin Australia uses a video safety demonstration and all passengers are required to have a direct line of sight to a TV screen. We were unable to deploy our personal television, so we had to move from our seat to a vacant seat to view the video. 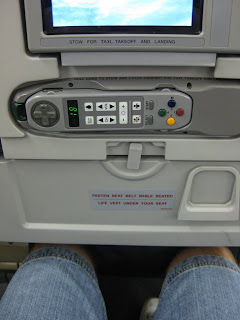 These other seats in the A330 cabin are very squishy without too much legroom (for my 6-foot plus frame anyway). They would be comparable to most international wide body long haul aircraft, but I thought that I would struggle if I had to sit in the seat for a journey as long as this one is.

So after the safety demonstration we were ushered back to our seats and settled back for take-off. 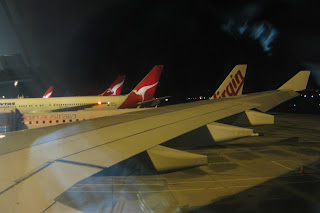 This flight was about 80% full – as stated by the cabin crew to another passenger – with about 245 passengers on this flight. Ticket prices are quite reasonable – and were lower than similarly timed flights with Qantas.

Terminal 3 where Virgin Australia operates from was being closing for the night at midnight for continuing development and upgrades (shown below), hence we boarded nice and early. But with the strict curfew at Sydney, our Captain advised that we would have to lose some time both by sitting on the tarmac and along the way once in the air. 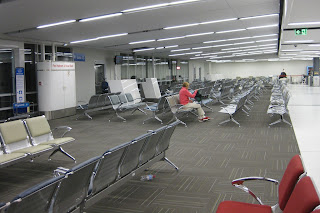 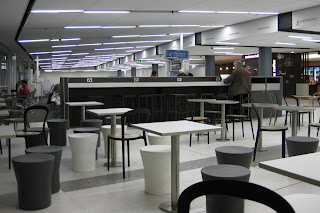 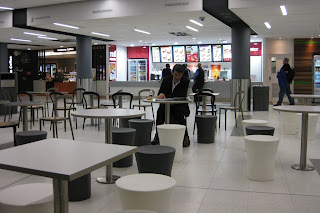 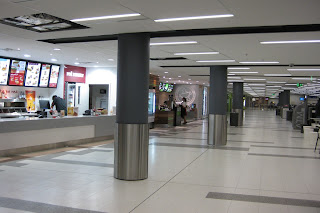 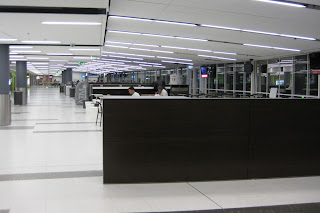 We evenutally lifted off Perth’s Runway 21 just after midnight. A fairly smooth take off with some nice views of the Perth city lights out the right side of the plane. A series of left turns soon had us established on our westbound track.

The seatbelt sign was turned off fairly quickly and the cabin service began. Passengers on flexi fares, and those in business class were offered pre-packaged meals first. The flight attendants move through the cabin and identify and offer these passengers their meals. These economy flexi fares are a little more expensive and offer flexible conditions on changing or cancelling flights – but effectively these passengers had the same economy seat as most of the other passengers but with a prepaid and prepared meal.

I’m not sure if the flexi-ticket idea with paid meals is a great idea – some of the meals weren’t taken – or the passenger had fallen asleep - so there were a few of these that were left untouched.

The remainder of the economy cabin was then offered food and drink to purchase off the trolley at the usual prices.

I actually fell asleep so can’t really comment on too much more of the flight!!

I woke up as we started our descent into Sydney. It was 5am and the Captain came on and advised we had been given a landing time into Sydney of just after 6am. We had to lose 25 minutes before we made our approach, so into a holding-pattern we went - along with an Emirates A380 and a Qantas A330 also from Perth. 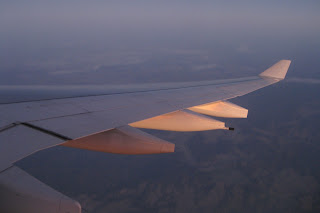 Holding done we turned off and headed to Sydney just as the sun rose above the horizon to reveal layers of fog over the land below – it was quite a lovely sight! 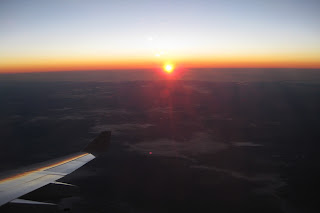 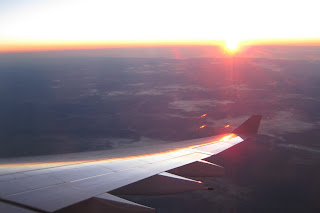 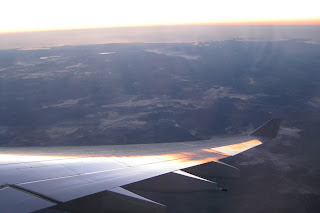 The forecast for Sydney for the day though was to be perfect and cloud-free - great for plane spotting! 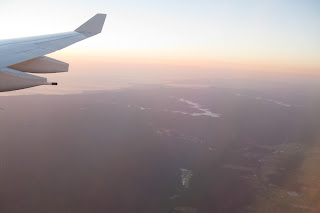 RIVET arrival with an approach from the South-West before turning South-bound and making our final approach after turning finals over Cronulla. All the way down the ILS glide-slope, we touched down on Runway 34Left at about 6.05am. We rolled through to taxiway Golf, and shortly after we had turned onto the A330 gate in Virgin’s Sydney terminal – Gate 40. 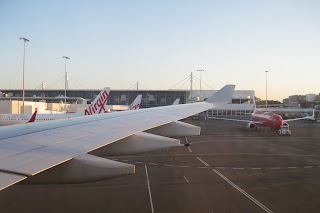 Soon off the plane and after a long walk down the Virgin terminal finger, we were outside at the baggage collection and the hire car desks. Bags came out about 20 minutes after we disembarked the aircraft. 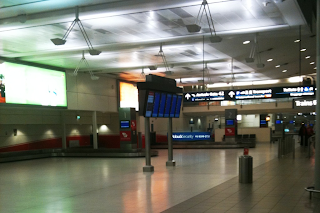 Overall impressions of the Virgin Australia A330 were quite positive.

The crew was very friendly and very enthusiastic about the new A330. Their service standards were excellent and they came across very friendly and helpful and understanding to the passenger’s needs. As it was the late evening flight, their roles were somewhat limited, with food service, and then attending to individual passenger calls. They all looked resplendent in the new Virgin corporate uniform – and what is pleasing is that all staff seem to have been issued with their new uniforms in one hit – I remember when the latest Qantas uniform came out there were staff in the old style uniforms for months after the new one was introduced.

The seat was very comfy and the extra money paid for the legroom was certainly worth it. As mentioned, seating in the remainder of the cabin is quite cramped for me – perhaps given some time I could be used to it, but if I was seated in the middle of the centre four seats, I may struggle to find a good level of comfort.

I hope that Virgin Australia enjoy much success with this new venture into the business class market. Pretty much all cross-Australia flights now offer the new Virgin Australia business-class product. 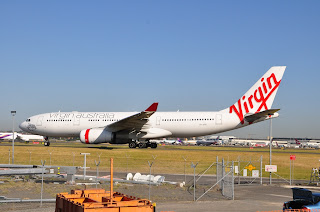 All new aircraft they are receiving, as well as some older aircraft which have been refitted, are flying daily between Brisbane, Sydney, and Melbourne to Perth. The business class fares are comparable and a little cheaper than Qantas, although at this stage, I have no plans to take one soon!
Posted by Damian F at 2:00 PM