Searching for the cheapest and 'best' way to get from Sydney to Mackay I found Virgin Blue was (as always) offering the cheapest fares by some margin over Qantas/QantasLink. The main issue I have with Virgin Blue though, is that most of their flights connect through Brisbane, and as we have unfortunately discovered, a late departure out of Sydney can mean a missed connection out of Brisbane.

Fortunately the direct Sydney to Mackay flight (one per day ONLY with Virgin Blue) was available and while it wasn’t the cheapest option, with the price about $20 more expensive each than the connecting flights, for the guarantee of getting to Mackay in one flight, and no chance of missing a connection, we decided to take them!

On the day we took the Sydney Rail Link from the City and got to the Domestic Terminal 2 at the Airport in no time. The crowd in the Virgin Blue terminal was pretty big with two queues to choose from – one to check-in and one for bag drop. There was also big lines for people running late for their called flights – as an aside, I can't understand how people can turn up at the airport just as their flight is being called... I couldn't do that.

We used the check-in kiosk and much to my surprise Virgin Blue’s seating allocations had split my wife and I into different rows and opposite sides of the cabin. Too make it worse, the cabin map had every seat taken so we couldn’t possibly change our seating. 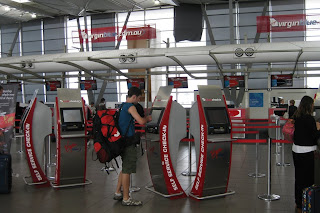 So over to the queue and half the people joining the queue were being ushered either into the bag drop queue and into the Check-in queue even if they already had a boarding pass. We joined the Bag Drop queue, but soon found that the check-in queue was moving much faster.

Turns out most of the Bag Drop counters were being used to check-in the late comers for the called flights, and, the distance we had to queue was also shorter – so there’s a tip!! I was probably not a happy camper – I could see some nice planes taking off outside too!!

Anyway, after about half an hour, we got to the front of the queue and approached the counter. We politely asked the young Virgin Blue lady about being seated together, and to my surprise, she looked a little confused about what I was asking about. She soon realised and with a few clicks on her computer, my wife and I were seated together in Row 15. She even apologised about the mix up.

No exit row seat available as we were to travel on one of Virgin Blue’s Embraer E-170 aircraft, which only has the four exits – 2 at the front and 2 at the back. 2X2 seating is in the main cabin, and Virgin Blue have made the first three row ‘Premium Economy’ seating which cost much more that the normal seats!

We passed smoothly through the now infamous Terminal 2 security check, where days earlier an officer had 'tripped' on a loose cord and shut down the terminal for a couple of hours, resulting in hundreds of passengers being affected by delayed and cancelled flights. 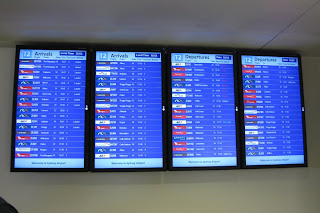 We found Gate 35, but went further down to the end of the terminal, to the windows at the end, where we watched the plane action and took some photos for a couple of hours!

After spotting some nice planes, and having a nice cup of coffee, boarding time approached, so we went back to Gate 35, and there were plenty of seats. Boarding the E-170 was quick and easy, despite the plane being full for today’s flight. 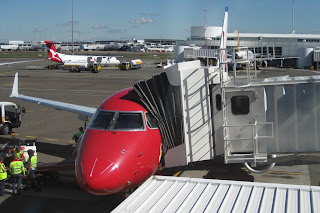 Some interesting sights around the plane - Virgin Blue (now Virgin Australia) new B737 VH-YFC parked next to us! 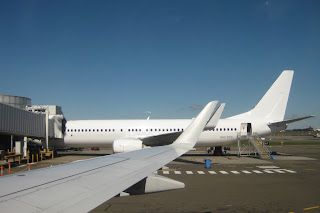 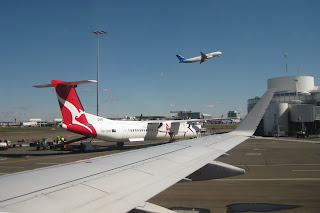 Even though there are no Exit Rows, the seats are fairly comfortable – I managed to just fit my 6-foot plus frame into the space as shown. Although, I would have been a little more squeezed up if the person in front of me put their seat back! 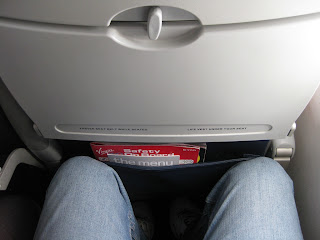 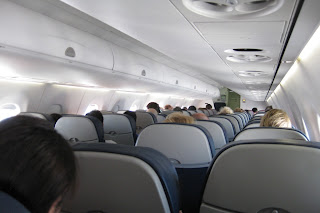 Pushed back on time and started our taxi to Sydney’s Runway 16L – interestingly Sydney Airport was under SODROPS (Simultaneous Opposite Direction Runway Operations) with Runway 34L used for arrivals.

Rolling start and lift off, with two left turns and a nice view down the coast over the water and South to Cronulla and further. 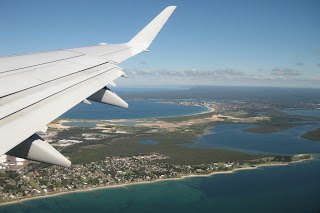 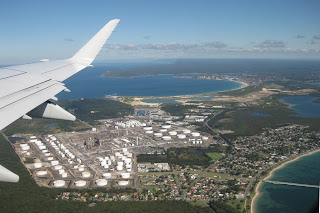 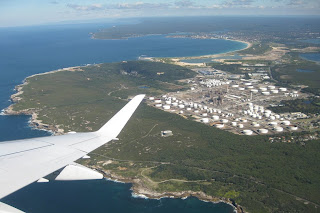 A little while later, we crossed the coast near Newcastle before the flight plan would take us overhead Narrabri then onto Taroom in Queensland, then Rockhampton and on to Mackay. 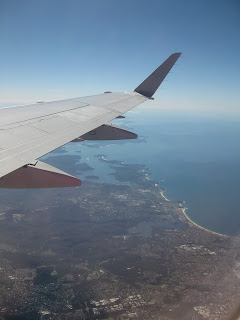 The seat belt sign went off pretty quickly and the crew of three swung into action, with the food and drink service about to start. After providing the tech crew with their lunches, we had to wait about another 20 minutes for the trolley to eventually make our row. Most of the passengers had decent meals like sandwiches although I decided to have just the crackers and some water. I also had M&Ms and all up this cost $10. Not too bad. 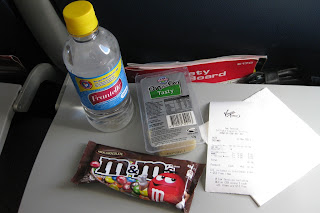 After the trolley disappeared, the rubbish was quickly collected - although a lot of the passengers, including me, hadn’t finished eating/drinking, so we had to hold onto our rubbish until the crew did another collection!

About 15 minutes later the crew was back and so with rubbish collected, I settled back for the nearly 2 hour flight North. 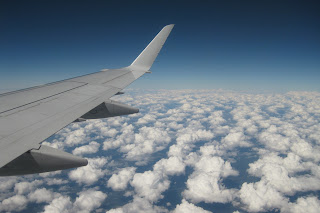 No in-flight entertainment so magazines and the outside view had to do!

Eventually the Queensland coastline came into view and as well as Gladstone and then Yeppoon and the Keppel Islands. We were obviously overhead Rockhampton (as planned), and soon after the Captain came on the PA and announced we would soon be descending into Mackay for an on time landing. 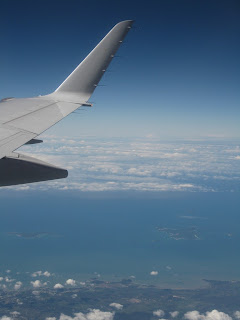 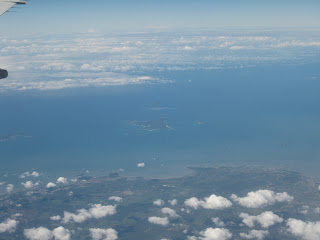 Smooth descent over the water with lovely views over the Whitsunday Islands. 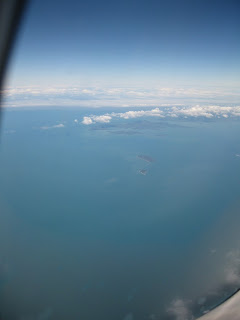 There was some cloud - not much - more thicker clouds out the left side of the plane with some scattered showers easily seen. Nice views of Abbott Point Coal Wharf and waiting coal ships. 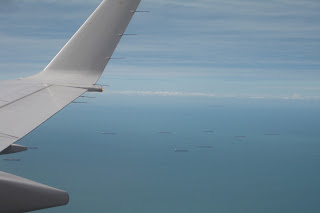 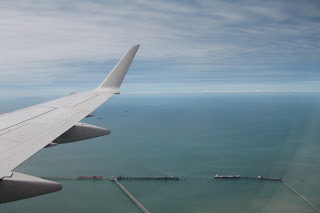 Turning down wind the seat belt sign came on and all were to be seated. Mackay Harbour came into view and with a series of left hand turns we were on visual approach and finals for Runway 14 at Mackay. 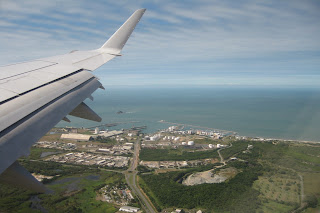 Smooth landing and short back taxi onto stand 4 on the apron. 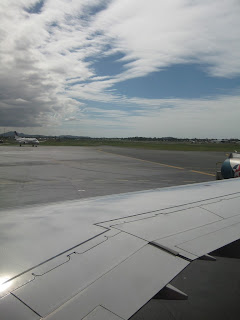 Off the plane via the front stairs, and through the new terminal, to the same old baggage collection area, where surprisingly, our bag was one of the first off!!

Off to the parking ticket machine and after a $100 Bill was paid we were off to lunch!

It is a shame these lovely little E-170s are leaving the Virgin Blue fleet – this was probably the first and last time I would travel on one. The direct flight option is such a simpler and better option than getting a connecting flight through Brisbane. There is no worry about missing a connecting flight – or not having bags make it Mackay. The 2 hour flight time does fly by when you have good reading material and the seats aren’t too uncomfortable as it seems Virgin Blue aircraft seats are just that little bit extra spaced apart than that of other airlines!
Posted by Damian F at 6:32 PM