After spending two wonderful days of spotting at the Renaissance Hotel (photos below), we arranged for the free Hoppa bus (included in the Spotters Accommodation package) to take us to Terminal 5. We must have just missed the bus as there was no-one waiting… so we waited about 20 minutes and along came the hotel guests, and then finally the bus! 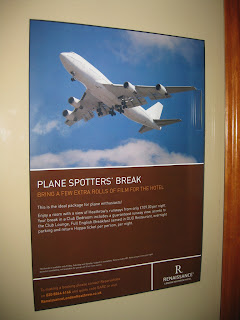 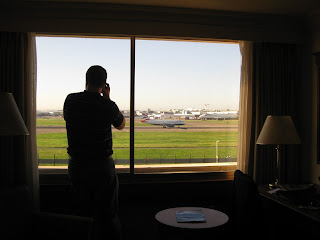 Heathrow’s Terminal 5 is a HUGE place – and the home of British Airways. Check-in was really quick and easy at one of the many BA self-check-in kiosks (they are similar the Qantas terminals we have in Australia). We then proceeded towards a counter to drop our bags off. We were through this process almost straight away as we were ushered by a friendly BA assistant to an empty counter. Bags checked-in, although some rearranging had to occur as BA has a policy that no bag shall be over 27kg. 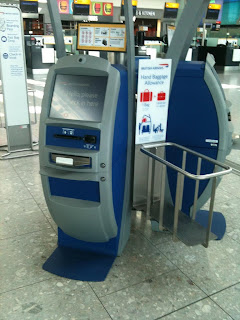 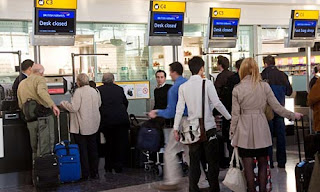 Through security and immigration – not much of a queue – although VERY strict and different screening procedures to Australia – we had to remove almost every lose article of our body/clothes/feet!

This is when we found Terminal 5 mind-blowingly huge… To the left and right were shops galore – and straight out front was a food hall – about 50 metres past that was the huge glass front and aircraft gates – see some photos below. 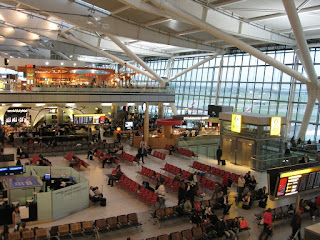 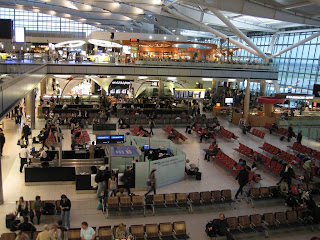 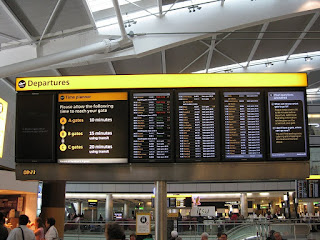 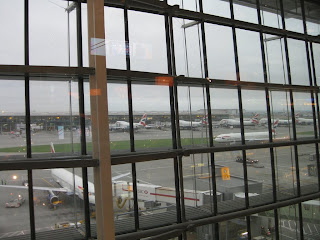 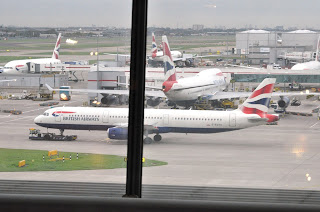 We wandered around and enjoyed a lovely fried breakfast at one of the restaurants. This was followed by some quick shopping, before we finally found our gate and a nearby seat.

Our gate was part of a ‘double gate’ – Gates 15 and 16 together – and of course, two flights were leaving through these gates at the same time – so things were hectic! Our plane - G-BZHB - is shown below waiting for us! 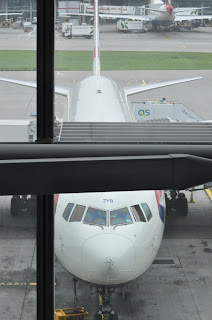 The boarding time came by and we eventually heard our call about 10 minutes later. Straight down the escalator to the ground floor of the terminal and out the gate and into our B767. The front was a business class setup (Club Europe Zone), with what looked like two sections of economy (Euro Traveller Zone) with different seat pitches.

We took our seats right at the back of the plane – Row 40 – and in the centre – no windows!

The overhead lockers were surprisingly quite small so packing bags in these were a challenge – problems were also caused by the amount of ‘stuff’ that some people brought on board!

We ended up pushing back pretty much on schedule, and soon after we started our taxi off to Runway 27 Right. A nice long taxi past the outlying sections of Terminal 5, and then past Terminals 1, 2, and 3. Plenty of interesting aircraft to be seen outside the windows – but alas were stuck in the middle of the plane!

Probably about 20 minutes after we started the taxi, we lined up and were airborne towards Paris – all up it is about a 40 minute flight.

After a few minutes, the captain advised that the cabin service could start and soon after the crew swung into full gear – I have never seen cabin crew work so fast! It was breakfast time and the crew got through the entire B767-300 cabin, handing out breakfast rolls and a cold drink in about 10 minutes.

They packed up these trolleys – and while we were still eating our breakfast – the crew had proceeded to start collecting the rubbish from the forward part of the cabin.

While we were eating I realised that we had already started our descent in Paris. Suddenly, the captain advised the crew that there was 10 minutes to landing – the crew looked at each other and shifted in to overdrive!

We finished the snack and our rubbish was collected. The cabin was then prepared – seatbelt sign on – cabin checks done – aircraft was on finals!! All seated in time for touch down on Runway 27 Right and a warm welcome to a sunny and crisp Paris!!

We then taxied across the field – past a new Air France A380 and several very exotic types and the various terminals at Charles De Gaulle.

We eventually got to our gate at Terminal 2A and were able to disembark. Through a couple of walkways – basically following the ‘crowd’ – and to immigration. Passport stamped and off to baggage collection.

Despite being about the only plane arriving into Terminal 2A, the bags came out after about 20 minutes waiting… Ours came – and was damaged – a nice big hole in the side of our nice new bag… Thanks British Airways!

Through arrivals and we found our transfer to our Paris Hotel. 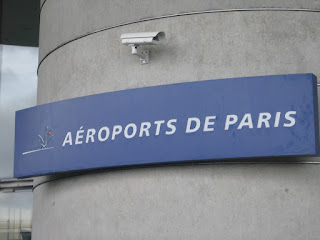 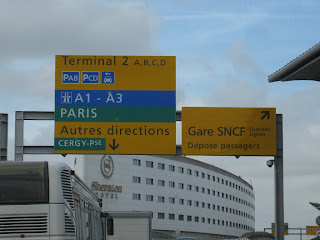 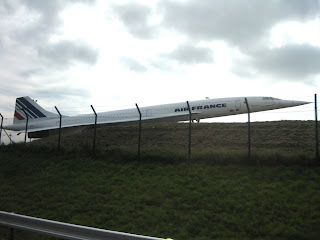 So after a few lovely days in the French capital it was time to head to Rome, albeit via London (Heathrow). We arrived at Charles De Gaulle terminal 2A, and found a big group of people looking rather disorganized, and yes, that was the queue to check-in for British Airways.

It seemed that our flight to Heathrow was the only one leaving this part of the terminal this morning. Although I then noticed the Kuwait Airways check-in open next door. It was in its own secured portion of the terminal and was under armed guard. Passengers only permitted to enter… Not even this Aussie tourist in search of a toilet!

After finding that much needed toilet stop, (too much good food the night before!!!), the BA check-in queue was bigger and much more disorganised.

There was one issue I found with BA’s setup – the automatic check-in counters were placed near the queues so passengers were struggling to check-in – and this was an issue as the BA staff would eventually only take bags from those who had already checked-in… It was chaos!!

So after waiting about 10 minutes, I noticed a kiosk was free, so I seized my opportunity to check-in on one of the kiosks. Boarding passes in hand, we lined up along with everyone else, and then after about another 10 minutes, BA staff arrived and began collecting bags… But chaos continued… Suddenly 320 different lines of people were forced to merge into one 10m roped off line to drop bags… aaarrrrggghhh!!!

Eventually with boarding pass in hand, we got to hand over our bag and politely requested if it could be taped up a but seeing how BA ripped it during the inbound flight. We received a stern look and a telling off that we should have done something about it when we arrived, but the girl behind the counter found some tape and the temporary repairs were completed.

Upstairs through security and passport control. Pretty easy and quick in Paris – again, we had to remove virtually everything from our bodies.

Found our gate and found some food – we still hadn't eaten breakfast and there were no good food shops open – aaarrrrggghhh!!!

Boarding commenced pretty much on time and soon we took our seats by the window at about the middle of the plane on the right hand side. These seats seemed to be a bit roomier than the inbound flight. Again like the inbound flight, passengers struggled to fit their luggage in the overheads. This flight was also full.

As the sun finally came up over Paris we pushed back and commenced a long taxi from Terminal 2A to the other side of the airport to depart from Runway 27 Left. It was a pity the window was foggy as we taxied past some beautiful and exotic aircraft parked on aprons just ready for spotters to log (as shown below)!! 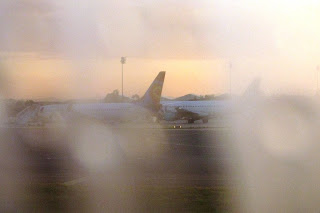 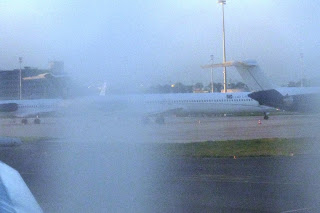 Take off was pretty quick, and after a series of right hand turns over the French country-side, we set course for the English Channel and on to London.

The cabin service was very fast again. We had a 45 minute flight time, and breakfast (a roll again) along with a drink was served, consumed, and packed up in about 20 minutes. By this time, we were descending into London Heathrow’s Runway 27 Right. Surprisingly there was no holding, and we proceeded straight into London. The photos below shown downtown London and the view to the South, as we made our final approach. 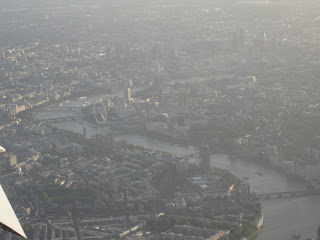 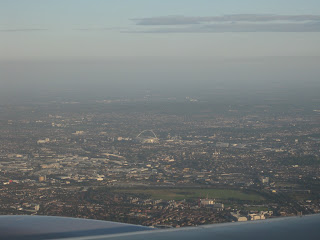 Off the runway and past terminal 3, it was a fairly quick taxi to our gate at Terminal 5. We taxied past several BA aircraft already parked, and after a short delay for another aircraft to get out of the way, we pulled into our gate. Some photos below show London Heathrow in the early morning. 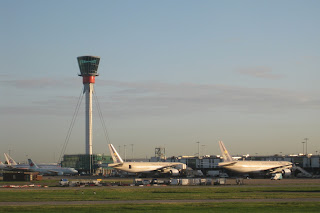 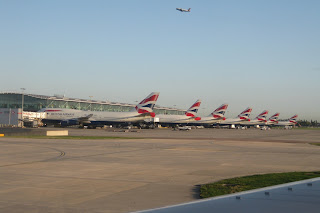 Off the plane, and straight to the immigration queue. Passport stamped and bags collected. Out through the ‘Nothing to Declare’ door – and no quarantine officers – pretty surprising compared to Australia!

Off to find a taxi and a quick trip to Terminal 4 for our flight to Rome.

Overall I really like the British Airways product on this short haul sector. The only downside was the chaos that we endured while waiting to check-in at Paris. Perhaps arriving at the airport a little later might have meant less time waiting and less frustration – who knows? It was an experience that I have never experienced in Australia, and hope never to. About 10metres of roped off line doesn’t work with about 200 impatient and tired passengers, who want to check-in, drop bags, and find some breakfast and coffee.

On board both flights though, the cabin crew were thoroughly professional, and have obviously been doing this job well for a number of years. The quick cabin service didn’t seem to faze them, and at all times – even when trying to fit huge bags into the small overhead compartments – they remained calm and professional… Really impressive!!

I would definitely be happy to fly with British Airways again – although perhaps next time, I would try to check-in online – or before we got to the terminal – to save some time and hassle with queuing with the many other frustrated passengers…
Posted by Damian F at 9:25 PM