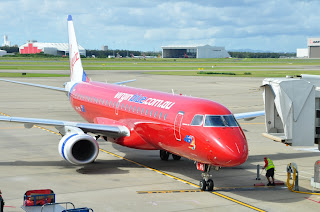 Early flight out of Mackay – due to having the connecting flight the quick check-in kiosks didn’t allow us to check-in so up to the counter we went – checked through to Sydney with a 1½ stop-over in Brisbane. Boarded on time – departed straight out of Mackay – smooth flight – in-flight service came through fairly quickly as not too many purchases were made. The Embraer 190s have plenty of room for a big bloke like me - and with the 2x2 seating, they actually feel like you're riding in your own private jet!! We had a smooth descent and landing in Brisbane – arrived on time. Our aircraft VH-ZPD is pictured above at gate in Brisbane.

For the Sydney leg, we noticed our flight was running 15 minutes late and with a gate change. We ended up pushing back 20 minutes late – departed to the South with a smooth climb to cruising altitude. Shortly before decent the pilot announced that due to weather we were slowing, and allotted a landing time some 35 minutes after scheduled arrival – slow but smooth descent with great views out the right side over Sydney – landed Runway 25 (cross runway) - and then a quick taxi past the International Terminal. Ended up leaving the plane about 45 minutes after our scheduled arrival. Bags came out without much delay - and so we started to walk to our hotel, the Formule One Hotel – Sydney Airport - review HERE.

From arrival into Brisbane we were to have only 30 minutes before our departure to Mackay. We should have thought about these flights a bit more carefully, despite Virgin Blue offering this combination as a bookable pair. Again the kiosks wouldn’t let us check in so up to the counter we went. I asked about the connection time in Brisbane and was told there shouldn’t be a problem but that there were ATC delays due to weather… oh oh!!

Sure enough our flight to Brisbane was delayed – ended up leaving about 30 minutes late – but we were reassured a couple of times that our Mackay bound flight would be held in Brisbane as there were about 20 passengers on our flight that were connecting like us. Typically long taxi in Sydney and then an uneventful flight, although we did slow when approaching Brisbane due to the weather. The Mackay bound passengers were given permission to deplane first, but as we did, the plane operating to Mackay was pushing back from the gate, and then the CSM announced that unknown to her, the decision was made not the hold the flight. We landed some 35 minutes late. 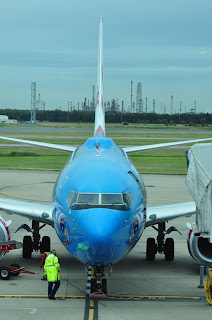 So began a 5-hour wait and then a further 20 minute delay for our Mackay flight. Thank goodness for the Blue Room!! Eventually in the afternoon we took off for Mackay in Virgin’s 50th aircraft VH-VBY pictured above arriving at gate in Brisbane. This flight was full, and the amount of room in the B737-700 seems to be a lot less than Virgin Blue’s other aircraft – B737-800 and Embraers. Long final approach into Mackay with great views over the city. Our bag came out fairly quickly which was a surprise as other airlines operating into Mackay actually put bags onto the conveyor belt after they have actually loaded the outgoing flight.
Posted by Damian F at 6:15 PM